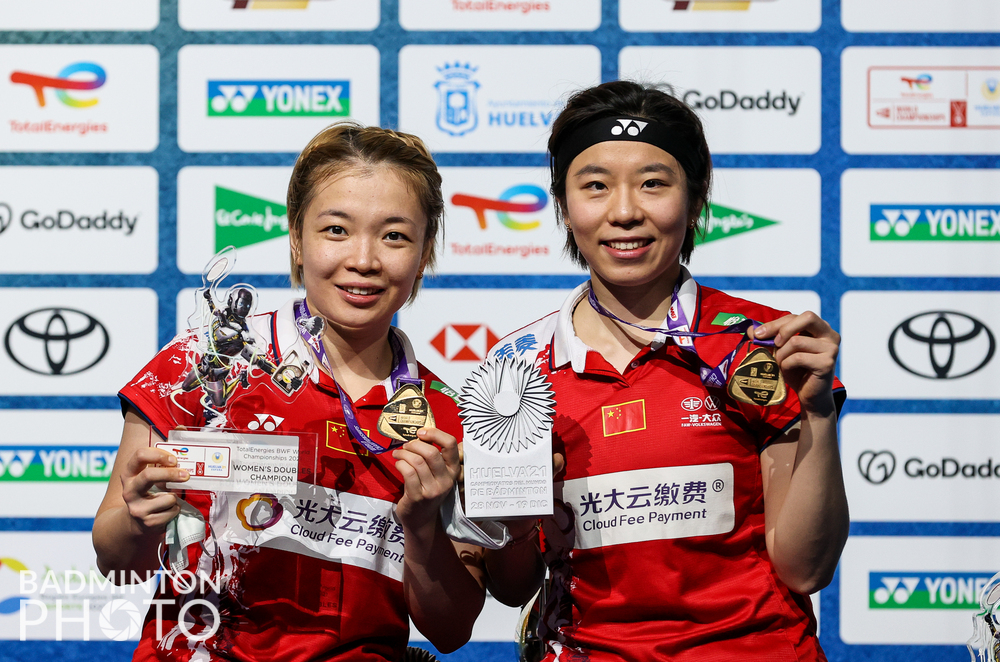 China’s Chen Qingchen and Jia Yifan became two-time women’s doubles world champions as they added to their YONEX All England Open victory in 2019 at the TotalEnergies BWF World Championships in Huelva.

Elsewhere, Yuta Watanabe and Arisa Higashino were not able to back up their 2021 YAE mixed doubles titles as they were beaten in the final by Thailand’s Dechapol Puavaranukroh and Sapsiree Taerattanachai.

Chen and Jia withstood a late fightback by second seeds Shin and Lee to win the first game of the women’s doubles final 21-16, with the second an equally nervy affair.

The South Koreans enjoyed a period of dominance before the pairs were locked at 14-14, at which point the top-ranked Chinese pulled away to win 21-17 and confirm their women’s doubles crown.

In the mixed doubles, Watanabe and Higashino struggled to gain a hold in the final as Puavaranukroh and Taerattanachai led from start to finish in the first game, winning 21-13.

The Japanese duo then went ahead for the first time in the match at 8-7 in the second game but the No.2 seeds fought back to win 21-14 and earn their first title as a pair.

No.1 took on No.2 in the women’s singles as Tai Tzu Ying faced Akane Yamaguchi and it was the lower-ranked Japanese player who came away the victor in Spain.

The pair were all square at 10-10 before Yamaguchi pulled away to take the first game 21-14 as Tai, the two-time women’s singles champion at the YONEX All England Open, could not hold on in the second.

The Japanese came away 21-11 winner to add World Championship gold to the bronze she won two years ago.

History was made in the men’s singles before a shuttlecock had been hit as Loh Kean Yew of Singapore confirmed his country’s first-ever medal at a World Championships.

His opponent, Srikanth Kidambi became the first male Indian finalist at a World Championship but could not claim the title as Loh was crowned the first unseeded men’s singles champion since 2013.

Loh came through the first game 21-14 but it was a tighter affair in the second, Kidambi, the 12th seed, came within two points of a maiden title before Loh held on to win 22-20.

The men’s doubles followed the pattern of all the finals by being won in straight games, as Japanese pair Takuro Hoki and Yugo Kobayashi came away 21-12 21-18 winners over 16th seeds He Ji Ting and Tan Qiang of China.

Hoki and Kobayashi dominated the first game but it took until 11-10 in the second to stamp their authority on the match.

The duos traded points until the end but He and Tan could not find a way back as Hoki and Kobayashi upgraded their 2019 silver to gold.