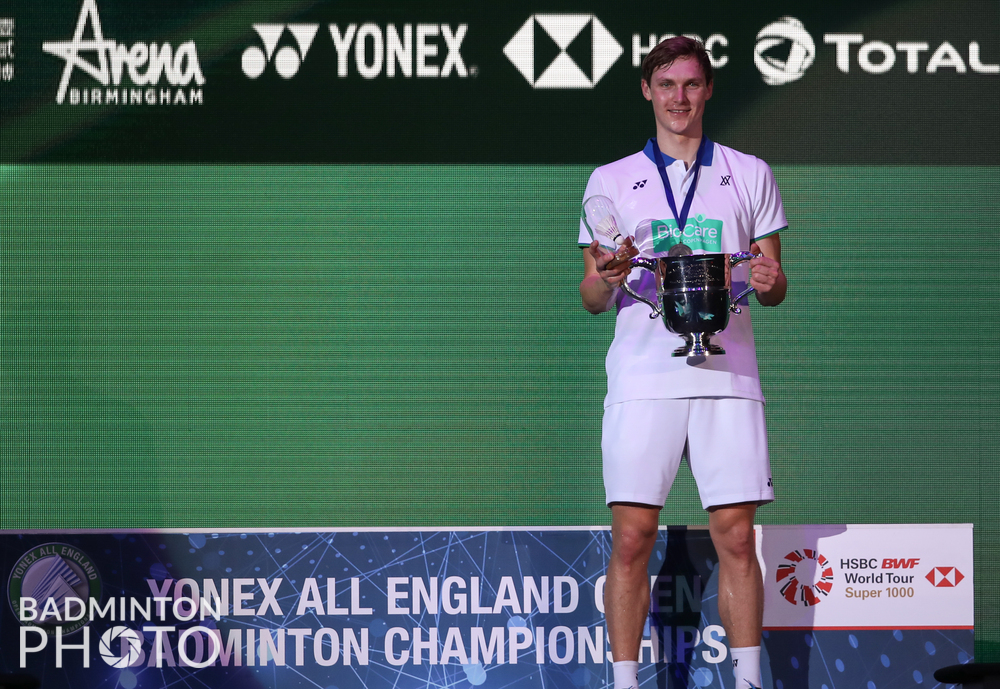 Draws revealed for the 2022 YONEX All England Open

Top seed Viktor Axelsen has been handed a tough start to his campaign for a second YONEX All England Open men’s singles title after the draws for the 2022 tournament were revealed on Tuesday.

Axelsen, 28, who won Olympic gold last summer, will open up against Bhamidipati Sai Praneeth, a BWF World Championship bronze medallist in 2019, in the top half of the draw.

Second seed Kento Momota, also a former singles champion at the Utilita Arena Birmingham, is up against Axelsen’s Danish counterpart and Thomas Cup teammate Hans-Kristian Solberg Vittinghus for his first round tie in the other half of the draw.

Momota may run into another Dane, Anders Antonsen, in the semi-final should both progress. But Antonsen starts his road to the final with a tough test by facing off with Loh Kean Yew.

Singaporean Loh won gold in the 2021 men’s singles BWF World Championships in December and will have his own ambitions to go deep into the draw in Birmingham.

In the women’s singles, world number one and three-time Yonex All England Open champion Tai Tzu Ying will take on Lianne Tan in the first round.

Tan, a former European Games silver medallist from Belgium should provide a stern opening test for Tai, who is seeded first for the first time since the 2019 tournament.

Akane Yamaguchi, seeded second, goes up against Phittayaporn Chaiwan of Thailand, and is in the same half of the draw as Chen Fu Yei (3) who will have to navigate an all-Chinese tie with Zhang Yi Man in the first round.

Elsewhere, in the women’s doubles China’s Chen Qingchen and Jia Yifan are the top seeds, looking for a second title here after their triumph in 2019.

They open up against a top-50 ranked pair of South Korea’s Kim Hye-jeong and Jeong Na Eun.

The draw sets-up the prospect of quarter-final clash between Chen and Jia and defending champions Mayu Matsumoto and Wakana Nagahara from Japan.

In the bottom half of the draw are second seeds Lee Sohee and Shin Seungchan. They take on world number 9’s Gabriela Stoeva and Stefani Stoeva of Bulgaria in a tricky opening round tie.

Over in the men’s doubles, top seeded Indonesian duo Kevin Sanjaya Sukamuljo and Marcus Fernaldi Gideon will have to get past Choi Solgyu and Seo Seungjae.

The Korean pair helped their country to Sudirman Cup success back in 2017 and it should make for an intriguing opening round tie.

Takuro Hoki and Yugo Kobayashi seeded third, who are aiming to keep their country’s streak going in this event after wins in 2020 and 2021 for Japanese pairings, are in the same half of the draw as the top seeds.

But they have also face high quality shuttlers in the opening round, drawn against Man Wei Chong and Kai Wun Tee, both fresh from helping Malaysia to a gold medal at the Asian Team Championships.

In the mixed doubles, Thailand’s Dechapol Puavaranukroh and Sapsiree Taerattanachai, currently ranked as the best in the world, are top seeds.

They will start their campaign for a maiden YONEX All England Open title against Chen Tang Jie and Peck Yen Wei, part of the Malaysian national squad that won a bronze at the Surdiman Cup last year.