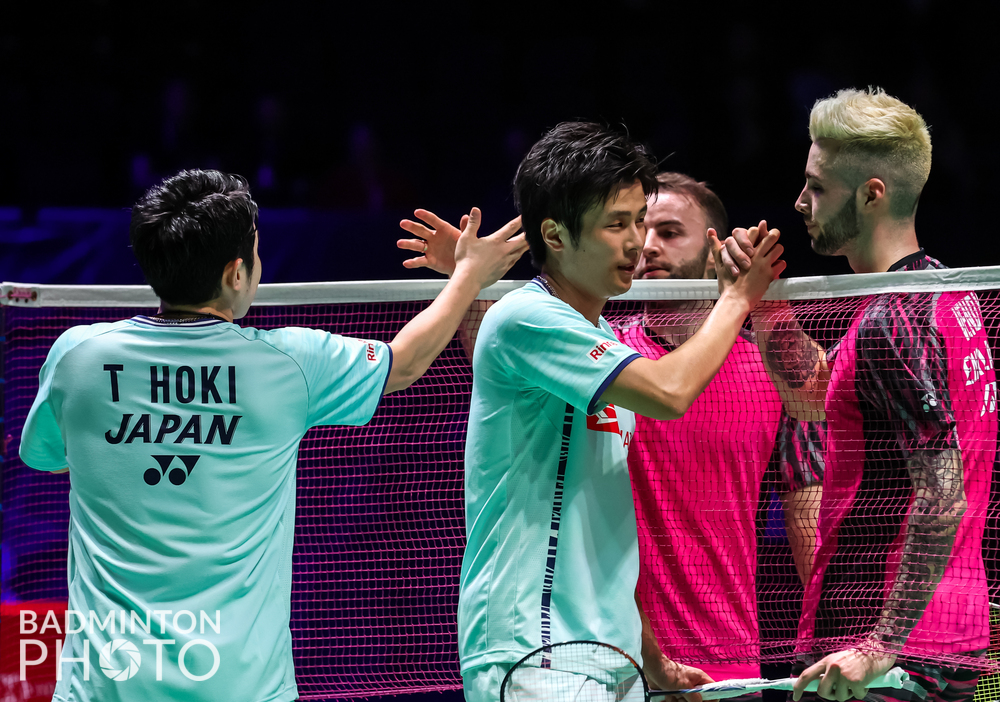 World champions Takuro Hoki and Yugo Kobayashi battled back from match point down to beat home hopes Sean Vendy and Ben Lane on Day 2 at the YONEX All England.

Hoki and Kobayashi, seeded third in Birmingham, cruised to the opening game but were pegged back by Lane and Vendy, who were buoyed by a passionate home crowd at the Utilita Arena.

Lane and Vendy’s momentum rolled on and they led 18-14 and later held a match point at 20-19 in the deciding game.

However the Japanese duo summoned all they could muster and converted a third match of their own to prevail 21-11, 19-21, 24-22 in a classic encounter.

Lane and Vendy was one of three English losses today, the home contingent’s campaign coming to an end.

Gideon and Sukamuljo trailed by a game to the Japanese pairing of Akira Koga and Taichi Sato, though rallied to seal a 15-21, 21-18, 21-18 victory.

“We are very happy to get through this match because our opponents also played very well today,” said Gideon. “They had really high spirit and really wanted to beat us, but we tried our best. We always want to do our best and we always want to win.”

Sen beat Viktor Axelsen at the German Open last week, and took the opening game 21-16 against the world number three.

Antonsen rallied from 10-5 down in the second game to stop the Indian star running away with victory, though a run of five of the last seven points saw Sen seal a 21-16, 21-18 win.

“I had a game plan. In the first game, it was just about getting the shuttle back and being steady,” said Sen.

“Towards the end it was just about taking the chances and going for the kill, and at the same time being patient and controlling the shot.”

Axelsen’s quest to reach a fourth straight final in Birmingham continued with a solid 21-14, 21-13 win over 2021 semi-finalist Mark Caljouw.

The world no.1 goes on to face Anthony Ginting after the fifth seed edged out Srikanth Kidambi 21-19 in the deciding game.

One of the clashes of the day came between women’s singles top seed Tai Tzu Ying and Busanan Ongbamrungphan on Court 1.

In a narrow contest, Tzu Ying managed to seal a 21-19, 22-20 victory to progress to the quarter-final, saving a game point in the second game to close it out .

Things do not get any easier for the world no.1, who now faces defending champion and fifth seed Nozomi Okuhara for a place in the last four.

“Because of the result, I am pleased. However the actual performance during the match wasn’t as good as I wanted. From tomorrow I would like to be even better,” said Yamaguchi, who takes on compatriot Sayaka Takahashi tomorrow.

Third seed Chen Yu Fei and eighth seed He Bing Jiao both prevailed to set up an all-Chinese quarter-final, while fourth seed An Seyoung continued her campaign with a straight games victory over Kirsty Gilmour.

After a huge win in the opening round against the top seeds, Korean pair Na Eun Jeong and Hye Jeong Kim progressed to the last eight of the women’s doubles with a three-game victory over Supissara Paewsampran and Puttita Supajirakul.

Third seeds Soyeong Kim and Heeyong Kong rallied from a game down to beat Canadian duo Rachel Honderich and Kristen Tsai, though there was huge disappointment for sixth seeds and reigning Olympic champions Greysia Polii and Apriyani Rahayu