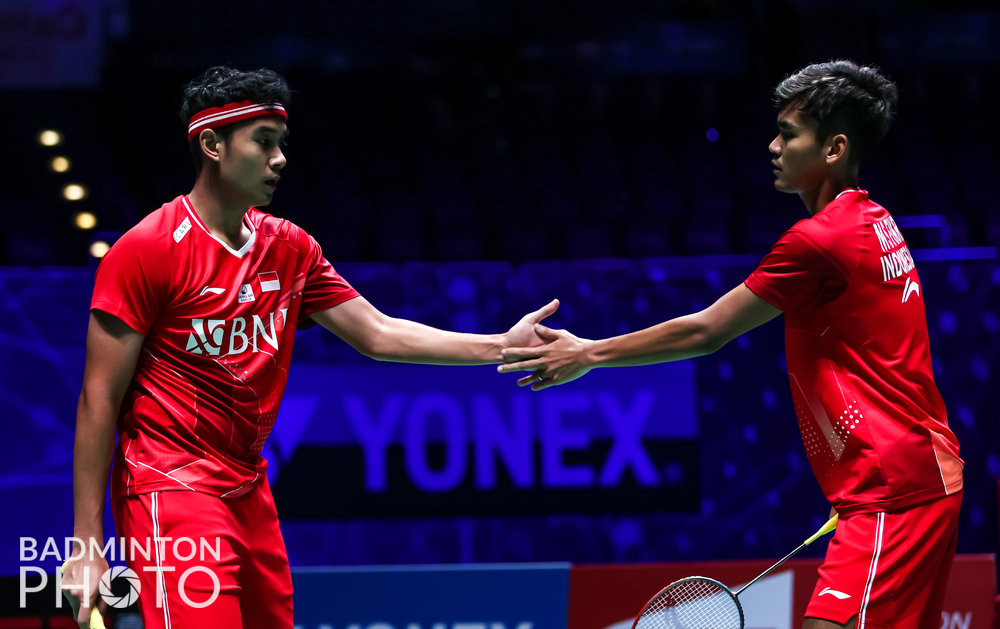 If there was any doubt that badminton was more of a national institution than a pastime in Indonesia, men’s doubles action on Day 2 at the YONEX All England put that to bed.

A big win for Anthony Ginting in the men’s singles – the fifth seed reaching the quarter-final – will attract attention.

Headlines might focus on Greysia Polii and Apriyani Rahayu’s retirement in the women’s doubles, the Olympic champions forced to withdraw due to the latter’s leg injury.

However it was the men’s doubles that was the success story of the day from an Indonesian perspective, with four pairs reaching the last eight.

There were the usual suspects such as Marcus Fernaldi Gideon and Kevin Sanjaya Sukamuljo, the world’s no.1 pairing – aka ‘The Minions’ – through after a hard-fought 15-21, 21-18, 21-18 win over Akira Koga and Taichi Saito.

“We always want to win, but you don’t know for sure what will happen next!” 🇮🇩

Gideon and Sukamuljo reflect on 2 wins from 2 👇#YAE22 pic.twitter.com/fWlpiD9As3

A clash against Indian fifth seeds Chirag Shetty and Satwiksairaj Rankireddy awaits them next.

It was also not an easy second round for ‘The Daddies’, Mohammad Ahsan and Hendra Setiawan, who were forced to a third game for the second time in two matches at the Utilita Arena.

What a day for the Indonesians so far! 👏🇮🇩

Setiawan & Ahsan make it 3 wins from 3 in the Men’s Doubles on Day 2 in Birmingham! #YAE22 pic.twitter.com/iox9tNVDlc

A 15-21, 21-12, 21-18 victory over Cheng Liu and Nan Zhang saw them through to the last eight, and the second seeds will be favourites for tomorrow’s clash against Danish duo Kim Astrup and Anders Rasmussen.

Yet the big two were perhaps not the biggest stories of the day, two surprise pairings breaking their way through to the quarter-final stage.

Bagas Maulana and Muhammad Fikri and Leo Rolly Carnando and Daniel Marthin also sit next to each other in the rankings, down at 28th and 29th respectively.

Maulana and Fikri were responsible for one of the biggest upsets of the day, knocking out Malaysian eighth seeds Ong Yew Sin and Teo Ee Yi 21-17 in the final game.

A win against a pairing 17 spots above them in the ranking is a significant one, though things don’t get any easier.

Third seeds and world champions Takuro Hoki and Yugo Kobayashi, who saved a match point to beat Sean Vendy and Ben Lane, stand between them and a last four spot.

Carnando and Marthin find themselves in the quarter-finals after also digging deep, a mammoth 20-22, 24-22, 21-16 victory over China’s Liu Yu Chen and Zhou Hao Dong seeing them into the last eight.

There is a possibility, admittedly a remote one, that there could be an Indonesian clean sweep in the semi-finals with all four in separate last eight encounters.

Tomorrow is unlikely to bring the same level of success in the men’s doubles event, though Indonesian eyes all over the world will certainly be focused on Birmingham tomorrow afternoon.