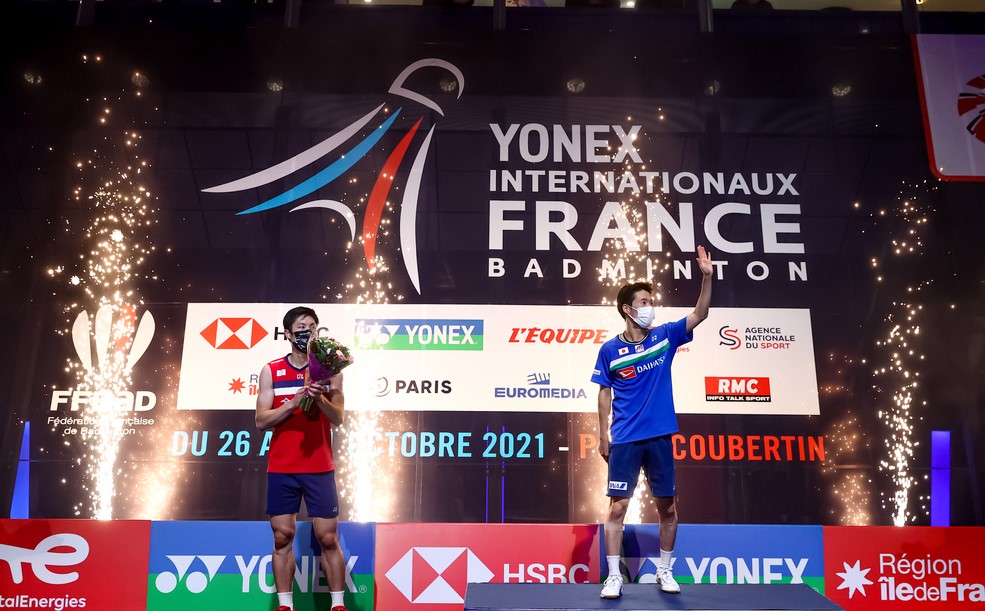 It was a Japanese singles double at the French Open on Sunday with Kanta Tsuneyama and Akane Yamaguchi prevailing in two high-quality finals.

In the women’s event, it was the end to a perfect week for top seed Yamaguchi who defeated Sayaka Takahashi in an all-Japan final.

The Japanese star is in rich form at the moment, having also won last week’s Denmark Open, and won the final in straight sets 21-18, 21-12.

Over in the men’s singles the absence of Chen Long, who had won the previous two editions in 2019 and 2018, guaranteed a new champion.

And in the end it was Japan’s Tsuneyama who took the vacant crown after a fantastic fightback in the final against Chou Tien-chen.

The Taiwanese fourth seed took the opening set 21-15, but Tsuneyama responded coolly by winning the second set 21-8, before edging a closer decider, 21-17.

The Japanese 25-year-old had already knocked out top seed and fellow countryman Kento Momota in the semi-finals.

This was after Momota, who was involved in a classic final in Denmark last week, retired at the start of the deciding set.

In the early stages, the big story was world number eight and 2021 All-England champion Lee Zii Jia being stunned by Singapore’s Loh Kean Yew, 24-22, 21-14 in the first round.

In the women’s doubles, it was South Korean dominance with Lee So-hee and Shin Seung-chan taking on Kim So-yeong and Kong Hee-yong, in Sunday’s final.

Top seeds So-hee and Seung-chan ran out 21-17, 21-12 winners, to take the title and make up for the disappointment of their defeat in the Denmark Open final last weekend.

The men’s doubles final was a much tighter affair with a surprise result.

The number one seeded pair from Indonesia of Marcus Fernaldi Gideon and Kevin Sanjaya Sukamuljo, were beaten 17-21, 20-22 by South Korean duo Ko Sung-hyun and Shin Baek-cheol.

They had already come through a semi-final thriller against fellow countrymen Fajar Alfian and Muhammad Rian Ardianto, with the deciding set ending 26-24, and weren’t refused to give in during a see-saw final.

The mixed doubles competition brought even more success for the land of the rising sun, with third seeds Yuta Watanabe and Arisa Higashino claiming the title.

The pair, who were triumphant in this year’s All-England mixed doubles, had already knocked out top seeds from Thailand Dechapol Puavaranukroh and Sapsiree Taerattanachai in a close semi-final.

They then breezed past Denmark’s Mathias Christiansen and Alexandra Boje in the final, 21-8, 21-17 to secure back-to-back titles, after a win in the Denmark Open the week before.

That concluded another thrilling week on the HSBC BWF World Tour after a vintage French Open tournament in Paris.

Don’t miss out, get your tickets today