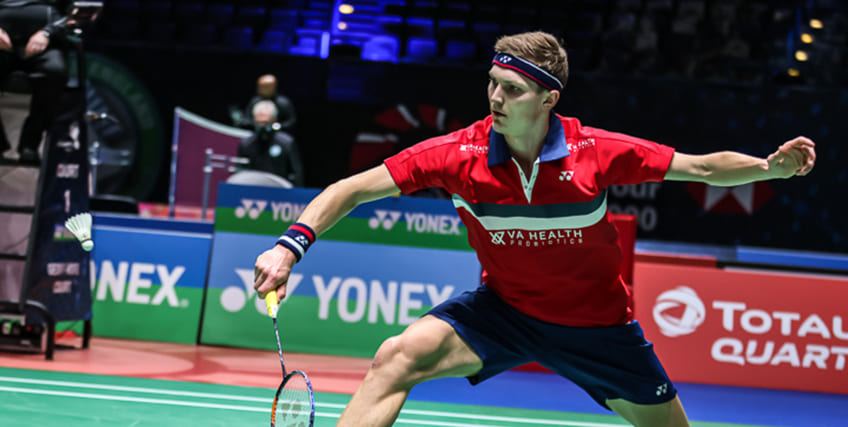 The fourth seed did not drop a game on his way to the final and was in similarly ruthless mood with gold on the line.

Axelsen needed just 51 minutes to wrap up a 21-15, 21-12 victory to become just the second non-Asian winner of the Olympic title, emulating the achievement of compatriot Poul-Erik Høyer Larsen at Atlanta 1996.

In the process, the 27-year-old ended Chen’s hopes of following in Lin Dan’s footsteps as a back-to-back gold medallist and Axelsen paid tribute to the beaten finalist after his victory.

“Obviously I respect Chen Long a lot,” said the Dane, who won bronze in Rio five years ago.

“He came over to my side of the court and told me that I deserved it and that my performance here has been great.

“I said, ‘Thank you so much’ and told him he has been a big inspiration to me. Then I asked him if we could change shirts, and we did.

“I can’t really describe my feelings. This is the biggest achievement of my career so to have this around my neck is the most awesome feeling ever.”

In the women’s singles, Chen Yufei marked her Olympic debut with gold after coming through an exhilarating final against Chinese Taipei’s Tai Tzu-ying.

The gold medal match was between the top two seeds and the quality was high throughout, with Chen taking the opener 21-18 before Tai levelled it up.

The top seed ultimately won the day by winning the decider, also 21-18, as the women’s singles title was won by China for the fifth time in six Games.

PV Sindhu backed up her silver in Rio with bronze in Tokyo after beating He Bingjiao 21-13, 21-15.

Greysia Polii and Apriyani Rahayu were overcome with emotion after becoming Indonesia’s first ever women’s doubles gold medallists, ending China’s dominance of the discipline in the process.

The pair, ranked seventh in the world, stunned second seeds Chen Qingchen and Jia Yifan 21-19, 21-15 in a final sealed in dramatic fashion, with their celebrations kept on hold after the Chinese pair challenged the call on match point.

But replays confirmed Jia’s shot had landed wide and Polii and Rahayu – who topped a group containing Team GB’s Chloe Birch and Lauren Smith earlier in the competition – sunk to the floor in jubilation as the scale of their achievement hit home.

“Twenty years ago, when I was 13 years old, I knew that Indonesia hadn’t made any history in women’s doubles,” said Polii.

“I knew that I was born to be a badminton player, and I had that faith when I was 13 years old that I wanted to make history for Indonesia.

“I’m speechless. You cannot describe it in words.”

China claimed every women’s doubles Olympic gold between 1996 and 2012 but have now gone consecutive Games without reclaiming their crown.

Chen and Jia knocked out top seeds Yuki Fukushima and Sayaka Hirota in the quarter-finals but found Polii and Rahayu in inspired form as the competition came to a thrilling conclusion.

The bronze medal match was an all-South Korean affair and Kim So-yeong and Kong Hee-yong sealed their spot on the podium by beating compatriots Lee So-hee and Shin Seung-chan 21-10, 21-17.

Like Polii and Rahayu, they sealed their success with a review as Lee successfully challenged a call of out on his shot to spark huge celebrations for the pair.

The decision wrapped up a 21-18, 21-12 victory for the unseeded duo over third seeds Li Junhui and Liu Yuchen, who went 10-6 up in the opening game before Lee and Wang hit back.

With the momentum shifted, the Chinese Taipei pair flew into a 17-6 lead in the second before sealing their success in the fourth of ten match points.

The first badminton gold on offer in Tokyo did go China’s way as the mixed doubles went to form, with the final contested between the top two seeds.

There was slight turn up for the books in the all-Chinese gold medal match, however, as second seeds Wang Yilyu and Huang Dongping overcame Zheng Siwei and Huang Yaqiong in a hotly-contested three games.

Wang and Huang took the opener 21-17 only for the top-ranked pair to hit back and win the second game by the same score.

But the second seeds held their nerve to take the decider 21-19 to leave Huang understandably proud.

“I am very happy,” she said. “This gold medal didn’t come easy, especially during the pandemic.

“We had some difficulties, but our country guaranteed our training and made us feel reassured we could train hard, so we feel lucky.”